1. Hello, how are you? What are you doing or preparing at the moment?

Things are pretty busy at the moment. We are getting ready to release a new album – which became a  two part double album at some point during the process!  The first part will be available in the autumn this year through Pavement Entertainment, who we recently signed with.  We have also returned from our European tour with Fairytale, which happened between May and June and included gigs in Germany, Holland and Belgium.

2. Since this is our first interview I think a short introduction of the band to our readers would be proper. So, when, how and for what reasons have you decided to form the band?

It seems that I can hardly remember a time when I wasn’t in a band. Dethonator is the continuation and evolution of the first band that my brother and I were in, going all the way back to school days. Both of us got into Iron Maiden in a big way in our teens and that was it, it wasn’t long before we started trying to play it. We’ve been Dethonator since 2009 and the line up of Tris, H, Adz and John has been together since 2014.

3. As a concept the idea of forming a band might sound easy, but it is a group crafted by individual people, so based on your experience can you tell us which the most important difficulties that a band has to confront are from its first steps till now? What makes a band move on despite the difficulties?

Starting a band is fairly easy as long as you can find enough musicians. Getting it off the ground is harder. Keeping it together and keeping it going is very difficult. The single biggest challenge to a band is people. Getting everyone on the same page, having everyone’s priorities in harmony, having everyone committed to the same goal; it’s almost never perfect. You have to find the right guys or, at least, guys who are right enough to work with productively.

It helps to have a very strong bond with your band mates if you don’t want the whole thing to fold the moment someone leaves. Dethonator is lucky to have two brothers that have an unshakable wish to play music together to keep things anchored during the hard times.  John (drummer 2014 – present) was our friend before he joined.  H (guitarist, backing vocalist, keyboardist) has been making music with us for over a decade.  Ideally, you get to the point where it almost feels like family.

4. I think that the band’s name is a mix of words like death and detonator. So, how did you come up with the name and is there a meaning behind the name?

No, there’s no meaning behind the name. It was an entirely practical decision. In an underground scene with 100,000 bands with increasingly abstract names, we wanted one that stood out instantly as a metal band when you read it on the lists. We also wanted something that another band didn’t have. So that’s it really. It’s a straightforward and unapologetic, slightly tongue-in-cheek Metal band name.

5. In my opinion your music involves many different metal styles and manages to dwell between the traditional and contemporary sound. So, how would you describe your sound to a person that hasn’t listened to you yet and which are your influences?

I don’t know how to tag our music. It’s the metal I want to hear. Your summary is quite astute. I don’t put much stock in sub genres. If it doesn’t fit, it’s a poor descriptor. If it fits perfectly, then it’s not likely to be very interesting in 2018.  Our new album is the most varied and colourful collection of songs we have ever made.  Some songs have a more thrash orientated approach.  That doesn't make us a thrash band.  Some songs have folk elements.  We aren't folk metal.  We have a viking metal styled track...hopefully I've made my point!

We have a very broad spectrum of influences in Dethonator. All the core standards you would expect; Maiden, Priest, Sabbath, Metallica etc. But there’s a lot more metal sounds that float around in the pot. Immortal, Dream Theater, Cannibal Corpse, Black Label Society, Nightwish, Iced Earth, Avenged Sevenfold, Arch Enemy, Clutch, Grand Magus, Amon Amarth, Devin Townsend, Nevermore...It all filters through somehow. There’s other stuff too. Queen, Phil Collins, Frank Zappa, Ramones, Classical Music…there’s always ideas that stem from inspiration outside of the expected places. We aren’t just trying recreate the NWOBHM in this band.  Melodic metal can be more than that and it doesn't have to be boxed into a limited time period or sound.  Some fans do have very conservative opinions on what is or is not metal, but I feel that metal is pretty flexible and broad in the scope of what it can do.  You don't have to become prog to reach outside the box either; it can be worked in with more subtlety than feeling you need to ape Dream Theater – if that's possible!

As much as Heavy-Epic-Thrash-Folk-OccasionallyBlackened-Viking-Melodic-Death-Prog Metal might look good on a shirt, it's nonsense.  Let’s just call it Metal; go and enjoy the songs and make your own minds up.
6. “Dethonator” is your debut album which you decided to release with your current lineup. Why did you decide to do that? Which are the new things that you introduced to this rerelease?

Our first album got the band some attention and support from a couple of industry parties, including BJF PR and the JMG Agency in the UK. Then Germany's Killer Metal Records wanted it so we decided to get it into a worthy state to represent the band. It’s been remixed and remastered and the vocals have been recorded again. 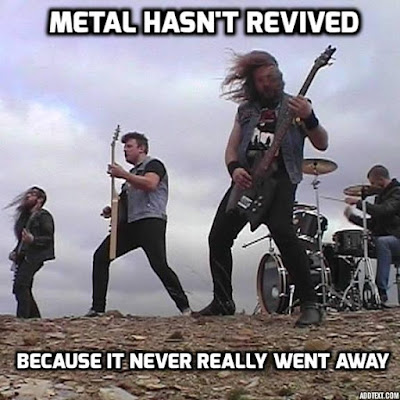 7. How was the contract with Killer Metal Records achieved? Are you satisfied with your cooperation so far? Will you continue with them?

We were scouting about for a label to take the record on and give it a home.  Killer Metal Records made us a good, fair offer.  They did a great job making a good physical product and getting the record distributed. It’s possible we could work together again one day in the future.

8. By the way do you plan to re-release your sophomore album too? And if I asked you to compare “Return to Damnation” with “Dethonator” in which ways are they similar and in which ways do they differ?

We currently have no plans to re-release Return to Damnation at the moment. It is still available at gigs and at all the expected digital outlets. We are more interested in new music and progressing forwards.

The main difference between the two records is that Return to Damnation is darker and with a greater emphasis on thrashier riffs and technical playing whereas Dethonator is melodically sharper and more anthemic.

9. What kind of lyrics do you like to write? Which things inspire you to write about?

We normally enjoy a traditional Maiden-esque story telling approach. Grand themes and epic tales.  I like to keep things a bit abstracted so as to avoid things getting too ham-fisted or literal.  Actually one part of our new album will feature a 40 minute narrative concept song telling the story of Dracula!  There’s been some social commentary here and there in our past albums but it’s not a dominant feature. And we don’t do the personal pain/angry relationship problems thing; I've never really felt much interest in that sort of “I feel this, I feel that, you did this etc“ lyric and there’s a lot of that stuff about.

10. What do you want both your music and lyrics to transmit to the audience in order to feel satisfied?

I want them to feel epic. I want people to bang their heads and raise their horns and drinks with a smile on their faces.  I want them forget their day-to-day troubles, abandon their weary cynicism and capture a bit of that real magic we feel when we first hear songs we love.  Because music is awesome.  There's so much of it around these days that we often take it for granted.

11. Great Britain has given us the heavy metal sound, but after the 80’s traditional metal explosion metal seemed like dead there. Based on your experience, do you think that heavy metal sound is reviving over there?

There’s still a healthy underground scene. Whether many bands truly break out of it is another question but there are lots of bands and regular gig nights.  There's many festivals, big and small. The general trends I see in England at the moment are the prominence of healthy extreme metal scenes and some retro-focused, 80s-styled Heavy Metal bands.  “Modern metal” has become a bit of a dirty word. Lots of bands are often brutal as hell, immersed in nostalgia or both.  Bands are issuing cassette tapes again.  Vinyl has really come back in a big way and bands are doing their own releases on these formats; we are thinking about it ourselves, actually.

In the UK, there can be a division between the fans of melodic and non melodic stuff; it can be a little tough playing on a metal bill if you are the only band with a lead singer rather than a vocalist.  The audience has become rather broken up through sub-genre elitism, which I find a bit frustrating.  But, regardless of style, there’s a lot of metal to enjoy all over the country if you look beneath the glass ceiling.

In a broader cultural sense, no. Metal is not reviving, at least not like it did in late 90s/early 00s where it seemed that a new teenage generation was evidently getting into Slipknot, Limp Bizkit, Linkin Park, Marilyn Manson etc.  At the time I was very young and stubbornly elitist about it.  “That's not metal, they should listen to Iron Maiden instead!  They're all  wrong, I'm right!”.  Typical young metal fan reaction, right?  But, looking back, it was a good thing.  At least something to do with metal or rock was happening to a generation back then. As much as we hate when our culture gets appropriated by the mainstream, that time and that music opened a lot of doors and gateways for teenagers getting into metal.  The mainstream and, worryingly, today's teenagers are now more disconnected from guitar based music than ever.

Then again, metal hasn't revived because it never really went away. In its own, separate world, there’s still an audience for it and the youth are still coming to metal and forming their own bands. It’s just not as prominent or perhaps as big as it once was. And, of course, the question over that “next big thing” remains unanswered. Does it need an answer? I'm not sure. There doesn’t seem to be a shortage of young metal bands. They just might not last as long or play to as bigger crowds as their forebears.  I do think that many of today's bands would generally do better to focus more on writing great music, better songs, than on what genre they want to fit, but that's just a personal opinion. Maybe that's an answer to the question; fans should search for new good songs, not new sounds.

12. Thank you for your time answering my questions. I wish you all the best! Please close the interview in any way you like.

Thanks for the interview. If you are reading this, give us a listen. I'd wager you’d enjoy Dethonator if you like metal. Perhaps, you might like us a lot.

Horns up, and never stop headbanging.