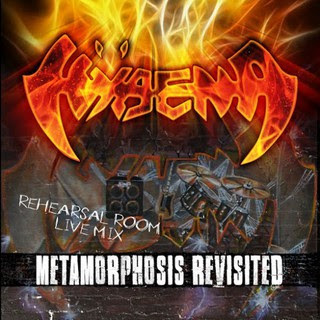 HYAENA - Metamorphosis Revisited
Qua'Rock Records
HYAENA's Facebook
HYAENA was probably the first metal band for musicians Gabriele Bellini (guitar) and Ross Lukather (drums). In 1985 the band released a demo tape under the title “Metamorphosis”. The demo was considered one of the best metal releases of the 80’s Italian metal scene. Recently the band has released it on CD and you can find a review on our webzine. After this release the only member left in the band was Gabriele and the band moved on more progressive metal paths.


It seems that the re - release of that demo made some impact to the metal audience and motivated the band to enter the studio and re-record the demo with 2 new musicians on the line – up. The musicians are: Claire Briant Nesti on vocals and Isabella Ferrari on bass.

As I have already mentioned in the previous review the sound of HYAENA definitely belongs to the traditional heavy metal sound, but it also carries influences from the thrash and speed metal sound. I can once again say that they are very close to bands like HELSTAR, SAVATAGE and CHASTAIN, but of course they have their own recognizable sound.

In this release HYAENA have rearranged the songs in order to give them a more contemporary sound. They have actually kept the essence of the compositions intact, but they have managed to make them sound fresh. Also the singer Claire, does a great performance and gives to the songs a dramatic touch. Actually she is a professional trained opera singer, but she does a great job as a metal singer too. Finally on this album you can find as a bonus a cover of GOBLIN’s song “Phenomena” (it had appeared in Dario Argento’s film) which is really good and Claire gives us also a touch of her opera singing skills.

You might find this disrespectful on my behalf, but I really liked a bit more the new version of the “Metamorphosis” demo. I think that the traditional metal fans should have both releases.