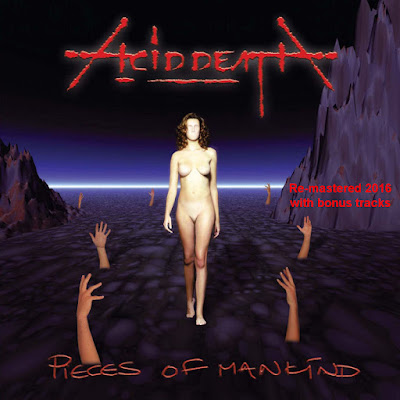 ACID DEATH – Pieces of Mankind (Re-issue 2016)
Copro Records
https://www.facebook.com/AcidDeathGR
ACID DEATH are surely a big chapter for the Greek metal scene, the entire metal scene not only its extreme branch. They exist since 1989 and ever since their debut in 1997 they haven’t released a mediocre album. All their outputs have been highly professional and perfectly executed.


Last year the band released their fourth full length work titled “Hall of Mirrors” which finds them at their best and at the same time they have decided to re-release some older material that is very hard to find starting with “Pieces of Mankind” which happens to be their debut album. It was originally released in 1997 through Metal Mad Music and then a couple of years later through Copro Records. This is the third release of this quality debut work, but it’s not just that since in fact this is a re-issue meaning that Savvas Betinis, the band’s superb vocalist, has re-mastered it and the band have also included two bonus tracks from their “Promo 1996” unreleased tape. Those of you who are into the Greek extreme metal scene will already know how important and special “Pieces of Mankind” is, but for those of you who are making your first acquaintance with the band let me tell you that it is a qualitative piece of progressive death/thrash metal music in the vein and style that DEATH, CORONER, CYNIC and the likes develop their music. The rhythm section is solid; the structures are complex and the music intricate but without ever becoming tiring. The extremity of the vocals and the music itself help balance the outcome which sounds both progressive and extreme at the same time, while the keyboards with their ‘80s approach create an eerie atmosphere. There isn’t much more to be said here… highly recommended to the fans of the genre and the band.
Christine  Parastatidou