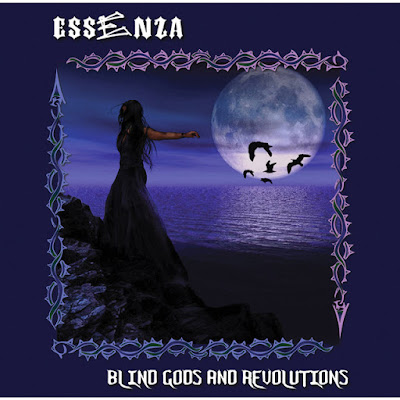 ESSENZA - Blind Gods and Revolutions
SG Records
Homepage
In the search I did, I found out that there are two bands with the same name both coming from Italy. The one that plays black metal and doesn’t exist anymore and the one that I am about to present to you that has many years of existence, although I only learned about them with this release.


ESSENZA started as a band in 1993 and during the first years of their existence their music was a mixture of hard rock, rock’ n’ roll, blues and progressive rock. They have released two demo full length albums playing this kind of music, when they decided to move to heavier musical paths. This is actually their latest and fourth full length release where the band moves on the traditional metal paths.

I know that most of my generation have learned about the metal scene through bands like DOMINE and RHAPSODY and we consider that this is how every band from Italy sounds. The truth though is that in the 80’s the metal scene of Italy was heavily influenced by the N.W.O.B.H.M. scene and actually it gave birth to some very good bands. Now you might ask why I am writing all these.

Well I do that because ESSENZA in this release really reminded me of the 80’s metal scene of Italy. Their sound is of course old school without though losing its contemporary touch and without lacking in originality. There are also some strong 70’s and 80’s British metal influences to their sound and in songs like the one entitled “Bloody Spring” they show some U.S. metal orientations too (like early CIRITH UNGOL perhaps).

I think that all the above make obvious that ESSENZA is a band with many different influences that manages to craft their own solid style and give us an album that has variety, good ideas and of course songs that you will enjoy to listen to. I think that the fans of the 80’s metal sound that want to listen to something fresh and new, should check these guys out.