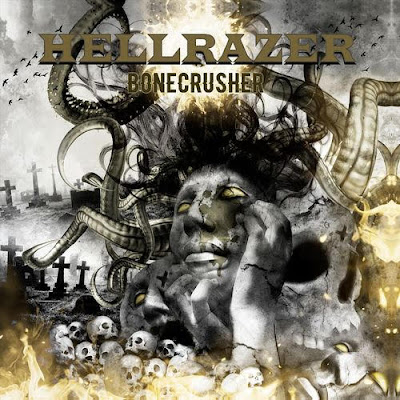 HELLRAZER is a hard working traditional heavy metal band from Canada. They deliver excellent pieces of melodic music the 80's way with a lot of melody and power!!!


I had the chance to hear a couple of nice demo CDs of HELLRAZER and their progress as a band was nice, since then I lost track of them and recently I got a promo CDR of their second and most recent album!!!

HELLRAZER is the epitome of traditional heavy metal, lots of riffs and vocals reminding the 80's British scene along with another face they show with Teutonic metal characteristics.

“Bonecrusher” is an album with 10 songs referring to war, power, social problems  and many more. The production is great and the musicianship precise and dynamic, so in the first place if you dig stuff like JUDAS PRIEST (“Painkiller” era), SAXON, RIOT (“Thundersteel” era), IRON MAIDEN,  LEATHERWOLF and on the second line stuff like PRIMAL FEAR, RAGE, RUNNING WILD, EXCITER, ANVIL etc , you are going to love this album!!!

I have no personal favorite songs, as inside my ears they sound equally nice, same great, metal , metal ,metal!!!

This is a private release and the band give the best they’ve got, so all I can say is to support them!!!!