SACRED BLOOD – Argonautica
Pitch Black Records
http://www.sacred-blood.com/sb/
Greek people from the ancient times had a special relation with the sea. We were explorers and sailors and because of that we managed to create a civilization that has influenced everyone around the world. I think in our modern times too, the Greeks carry inside them, at least most of them, the spirit of Odysseus and the Argonauts. SACRED BLOOD draw inspiration from the legend of the Argonauts and have created their third studio full length album which once again is a concept.
THE COVER: It is a beautiful and epic painting that depicts Jason achieving his legendary task.  It shows Jason stealing the Golden Fleece from the sleeping dragon who guards it. You can also see a woman who is no other than Medea who pours a magic potion to the dragon in order to put him to sleep. I think that it is an image full of details and it made me remember one of my beloved ancient Greek myths.
MUSICAL STYLE: We often like to talk about how a band has progressed or not and even set the question what progress actually is. In my own terminology progress means to enrich your sound without though losing your identity. I had the opportunity to follow the band’s career from the start and I mean from the era that they were called simply SACRED and they released the great demo entitled “Clash of the Titans” (2003). The band back then was playing heavy metal with lots of epic metal elements and they still do in their new album. The comparison though you can make from their start up to know makes it obvious that the band has enriched its sound and added elements that make their music even more narrative and epic. It makes you feel like you are watching an epic history film.
COMPOSITIONS: “Argonautica” includes 11 compositions that musically move on what we call epic heavy/power metal. The band obviously is influenced both by the U.S. and the European metal scene. I think that in their influences there are bands like MANOWAR and BLIND GUARDIAN amongst other, but they have managed to transform all these influences into their own personal style. Besides that, the band also uses folk melodies and keyboards that have a soundtrack feeling. There are moments when they also use female vocals and narrations.  All these elements give to the album a dramatic character and help you to follow the story with even more interest. As I mentioned above the whole album gives you the feeling you get when you watch a great epic movie. This doesn’t mean that you won’t get plenty of time to bang your head.
CONCLUSION: It is ordinary for bands to claim that their latest album is their best, but if SACRED BLOOD say that, then they probably will be right since they have created an epic metal album that combines creativity, imagination, enthusiasm and maturity. The fans of epic metal owe it to themselves to listen to this album.

ROBERTO TIRANTI – Sapere Aspettare
Old Mill Records
https://www.facebook.com/pages/Roberto-Tiranti-Solo-Artist/28167190948?sk=timeline
The name Roberto Tiranti might not tell you something, but this is the same guy under the name Rob Tyrant. As Rob Tyrant he was the singer of the well known Italian band LABYRINTH; a band that is considered amongst the most important for the modern Italian scene and of course it’s a band that has achieved recognition amongst all the heavy metal fans around the world. So, this is the solo work of the singer of LABYRINTH.
THE COVER: It is actually a picture of the musician who is sitting on a chair in a garden and he has a classical guitar (or Spanish Guitar) on his feet. It is quite an eloquent and suggestive cover. It suggests that here Roberto moves on more melodic and non metal paths.
MUSICAL STYLE: Well, I mentioned above that here Roberto tries to express himself through different musical paths away from the heavy metal sound that he has got us used to. The sound that you will listen to here is definitely inspired by the pop/rock and AOR sound. In my opinion the whole album has a nostalgic 80’s essence without though losing its touch with the contemporary sound of these genres.
COMPOSITIONS: The album includes 11 compositions that move on the melodic paths of pop/rock and AOR sound. In my opinion the influences of Roberto come from singers like Bryan Adams, his compatriot Eros Ramazzotti, but you can also find references here to the sound of the latest BON JOVI. It is an album based on melodies and its intention is to relax the listener and create to him some optimistic and even nostalgic feelings. You must also know that the biggest part of the lyrics is written in the Italian language.
CONCLUSION: It is really nice to see musicians express themselves from time to time through different musical styles. Somehow, this renovates them and gives them inspiration to move on. So, this is what Roberto does here and he does it well. He knows the pop/rock sound well and the album, without me being an expert on this sound, has quality and nice catchy melodies. I don’t know how many of you that read this webzine like this kind of sound, but I have to be sincere and tell you that it is a good album for the genre that it serves.
Nick “Verkaim” Parastatidis STORY OF JADE - Loony Bin
Black Tears
http://www.storyofjade.net/
Everyone enjoys a good horror story and I think the Italians had the talent to create good horror stories. If you are not aware of the Italian horror cinema, then you don’t know what you are missing. STORY OF JADE seems to be inspired by the horror genre and through the music they try to tell us their own stories and give us some chills. “Loony Bin” is their sophomore release and comes 4 years after their debut album entitled “The Damned Next Door”.
THE COVER: It is a picture of a female person that wears a straitjacket. Obviously madness and horror stories go hand in hand. It might not be something original, but yet it fits to the musical personality of the band and the album.
MUSICAL STYLE: The band names its musical style as horror metal and this is a genre that has included many bands and artists that range from ALICE COOPER, KING DIAMOND, LORDI, HALLOWEEN, DEATH SS to CRADLE OF FILTH and ROB ZOMBIE. The basis though of STORY OF JADE is traditional heavy metal and sometimes they use some keyboards in order to create a gothic atmosphere. When the band becomes more aggressive then they also use thrash metal riffs. So it is obvious that STORY OF JADE musically moves in the heavy/thrash metal sound.
COMPOSITIONS: Their new album includes 11 compositions in which you can find a guest appearance of Gerre from TANKARD on the song “Blood Hangover”. The band moves between heavy and thrash metal and they have managed to create a recognizable sound. Also impressive are their lead and solo parts which are quite technical and imaginative. In my opinion in their sound there are some references to bands like KING DIAMOND and when they become more gothic and aggressive I have discovered a reference to CRADLE OF FILTH. The sure thing is that there is a lot of variety here.
CONCLUSION: I can easily imagine the music of STORY OF JADE being the score for a horror movie and this is a success since the band claims to play horror metal. So, if you are into heavy/thrash metal and you like horror stories too, then you will enjoy them too.

KOZA NOZTRA - Sancta Delicta (Atto I)
Independent
http://www.kozanoztra.net/
I have already presented to you in the past the previous EP of the Italian band KOZA NOZTRA under the title “Cronaca Nera (Part II)” which was released in 2014. So, after a year from that release they strike back with their new EP under the title “Sancta Delicta (Atto I)”.
THE COVER: It is a morbid one since it shows a statue that instead of a head has a skull. It is a clear depiction of death. My Italian is not so good, so I can’t tell you how the cover is connected to the lyrics. The sure thing is that the cover looks spooky and imposing.
MUSICAL STYLE: KOZA NOZTRA definitely have their own musical personality and this is underlined not only by the use of the Italian language, but also by the fact that through their lyrics they talk about our modern crazy world and also use black humor. Musically they belong to the traditional heavy metal sound, but as I mentioned above they don’t remind me of something in specific, since they have their own musical identity.
COMPOSITIONS: The new EP of KOZA NOZTRA includes 7 compositions that move on the path of traditional heavy metal music, but they also have here some thrash metal touches that brought to my mind METALLICA. The fact is that the band stays faithful to the sound that they have introduced me to with their previous release.
CONCLUSION: One thing that bothers me is that my knowledge of the Italian language is not so good in order to fully understand the band’s lyrics, on the other hand though music like mathematics is a global language and KOZA NOZTRA offers us again a good album of traditional heavy metal. 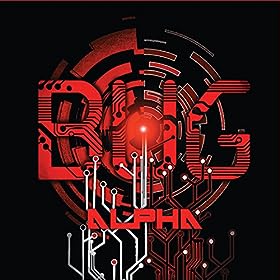 BUG – Alpha
Quà Rock Records
http://www.lafucinastudio.com/portfolio-item/bug-alpha-2/
I don’t have any information about this release. I only know that it is a solo project of the musician Lorenzo Meoni. The booklet of the CD only included the track titles and a story about a cyborg that rebels against his master (The Terminator is a big influence for everyone).
THE COVER: The cover is simple enough and yet fits to their whole philosophy. It shows some digital branches and the world BUG on the center and below the title of the album “Alpha”.
MUSICAL STYLE: This is an instrumental album and its creator has the hard task to express all the emotions and ideas through his music. The interesting part though with BUG is that Lorenzo uses his skills in order to create the emotions he wants to express through the music without showing off. The basis of BUG’s sound is traditional heavy and speed metal, but you can also find some jazz or fusion elements.
COMPOSITIONS: The album includes 11 instrumental compositions and through them it narrates the story of a man crafted cyborg that feels human emotion and rebels against his creator. Such a story needs to be told by music that is both melodic and aggressive and that’s exactly what you will listen to here. Personally speaking the style of Lorenzo brought to my mind Jeff Waters (ANNIHILATOR).
CONCLUSION: I am not a big fan of instrumental albums because most of the times the musicians behind them use them in order to show off their skills. These kinds of albums apply better to people who want to improve their skills. There are though some instrumentals like this one that are made for all the listeners and restore my faith to the genre. If the absence of lyrics doesn’t bother you, then you will enjoy this album.