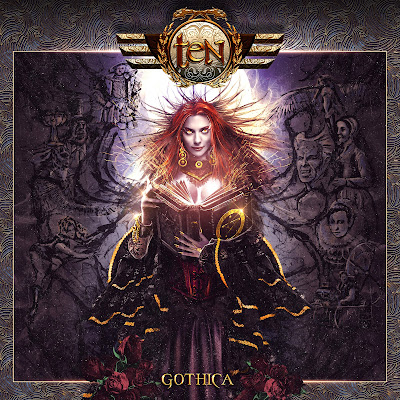 Number thirteen, if you are superstitious, is not considered a lucky number. For TEN though it seems to be a fortunate one since “Gothica” is their thirteenth studio release and also their comeback to Frontiers Records with whom they have signed a contract for many record releases in the future. I think that this can make the fans of the band really happy.


Personally speaking, I am a fan of the heavy metal sound and my hard rock tastes, the genre that TEN belong to musically, are stuck in the 70’s (you know bands like NAZARETH, DEEP PURPLE, RAINBOW, URIAH HEEP, JETHRO TULL etc), but TEN is an exception to that rule. The album that introduced me to their sound was the their fourth which had the title “Spellbound” and I was surprised how epic a band that moves on the melodic hard rock path can sound. In a few words TEN were something out of the ordinary or something that you don’t find easily in the hard rock genre. When other bands of this genre choose to sing about babes and love stories, TEN take inspiration from mythology, history and literature.

“Gothica” has all these elements that made TEN successful and it is a release that has memorable compositions and lyrics that make your mind travel and escape a bit from the grey reality. Also in my opinion TEN can give a motivation to the listener to read some good books or learn about mythology and history.

The new album has really good songs and as strange as this might sound, no one can be considered as filler. As for me the songs that stand out from this release are "Jekyll and Hyde", "Travellers" (this one has a melody that really fits perfectly to the time traveling theme of the song), "Wild King of Winter" (the heavier song of the album, it is almost heavy metal, which is inspired by George R. R. Martin's series of novels A Song of Ice and Fire), "Paragon" and "La Luna Dra-Cu-La" which has THIN LIZZY and Gary Moore elements with some rock ‘n’ roll touches too.

All in all, “Gothica” is once again an album that moves on the high standards that the band has set all these years and it is an album that can travel you, entertain you and above all keep your interested from its first till its last second. I think that it is a release that will bring satisfaction to the fans of the band and can also work as an introduction for new ones.