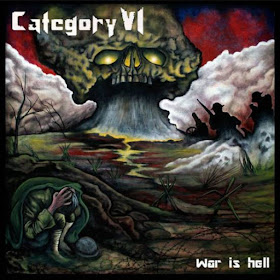 There are countries like Canada that when you start thinking about its metal scene you realize it has one of the strongest in the world and that has offered us through the years some really great bands which have released some classic metal albums. CATEGORY VI are hailing from Canada and their debut album under the title “Fireborn”, which was released in 2013 as an independent work, caught the attention of Killer Metal Records and decided to offer them a deal for their sophomore album which I will present to you here.


It is a fact that many can release a good debut album, but the difficulty is to release a second album which will be as good as your debut or even better. I admit that I haven’t listened to their debut album, except for the song that is included in the DVD compilation of their new label, but the quality of “War Is Hell” is very convincing and proves that the band is here to stay.

“War Is Hell” is an album inspired by the 80’s heavy metal sound with a strong influence from the U.S. power metal scene of that era. From the first listening, you will find in their sound references to such groups like CHASTAIN (due to the highly skilled guitar leads and solos thrown in this album), HELSTAR (when they choose to add some speed in their compositions) and OMEN (when the band moves on epic paths).  The melodies and the top notch guitar work that is displayed here which is supported by a steady and accurate rhythm section is the one part that makes this release to stand out, the other is the warm voice of Amanda Marie Gosse who is definitely inspired by the way that great DIO and Bruce Dickinson sing and resembles other great female performers such as Leather Leone (CHASTAIN) and Veronica Freeman (BENEDICTUM). All these elements lead to the creation of an album that as it proceeds gets better and better and motivates you to listen to it again and again.

On the lyrical part the band deals with themes like freedom of choice, inner struggle and of course war and the destruction it brings both to humanity and planet earth. Actually the song “War Is Hell” which is the most epic and dramatic song of the album is inspired by true events and in specific by the battle of Beaumont Hamel on July 1, 1916 which was one of the most devastating battles during the World War I era.

So, as a conclusion I can say that “War Is Hell” is an album that every fan of 80’s heavy/power metal (here in Greece some will also appreciate the guitarist’s look since with his mustache reminds us of metal bands of Mausoleum Records that we like – too many to mention) will like and it is an album that will definitely keep your CD player occupied for a long time.