EXILED ON EARTH-Forces of Denial Review 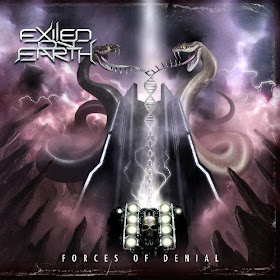 
They combine the complexity of US power metal compositions with the European sound and passion on guitars and bass lines.
Oh yes!!! There are tons of melodies on this album. On the positive details of this band is that the singer is a guitarist too, so this quartet delivers more power and more electricity on the songs.

Everything is there, the muscles of US power such as LETHAL, CRIMSON GLORY, SAVATAGE, AGENT STEEL, HEATHEN and a little bit of OVERKILL mixed with the double guitar sounds of IRON MAIDEN, SAXON and with an intense and super rhythm section with a merciless snare drum work and a killer bass player. Pay attention to “Into Serpent’s Nest” and “Lifting the Veil” and you’ll be amazed by his performance!!!

Generally a nice album that’s a must have for all US power metal fans with a fantastic artwork and great lyrics with nice themes!!! Well done!!!