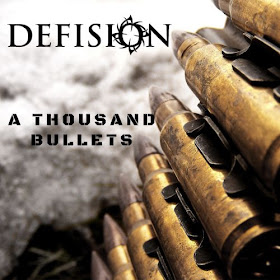 DEFISION – A Thousand Bullets EP
Independent
http://www.defision.eu/
Well, it is not accurate to say that all metal scenes were great in the 80’s. Maybe this might be the rule, but there are always exceptions. For example the Greek metal scene had some very good metal bands in the 80’s who were heroes since they managed to do so many with so little in their hands. The fact though is that most of the 80’s, 90’s and early 2000’s Greek metal bands sounded amateurish and had this attitude that if they released a demo they would become the next big deal in the scene. It seems though that the scene of my country has made huge steps of progress and now we have the chance to listen to more bands that work on a professional level and are down to earth. I think such an example are DEFISION from the city of Alexandroupoli.


One thing that we metalheads like to debate on is how true metal a musician or a band is. In these conversations though we ignore that in the early 80’s and before that era the bands that formed the sound we love had experimented with many different musical styles. After all, metal started as an experimentation as BLACK SABBATH have stated.  I mention all these because DEFISION too don’t stick in one specific musical style while they create their sound. It is obvious from the songs that are included here that the band tries and I think that manages to do that well, to combine the traditional metal sound with modern elements of this music. So, the songs in the EP have melodies and yet a heavy and steady rhythm section with lots of grooves in it.  Personally speaking I would say that the band plays modern heavy metal with some thrash metal elements that make them sound more aggressive. As for their influences I think that DEFISION draw inspiration from bands like METALLICA, BLACK SABBATH and IRON MAIDEN.

All in all DEFISION with their EP left me with very good impressions since they are a band that works on a professional level (of course they could have a better sound production, but this is something that can be improved) and sound confident and experienced. They also have an enthusiasm and manage to pass this through their songs to the listener. In my opinion DEFISION are on the right path and they deserve our attention.